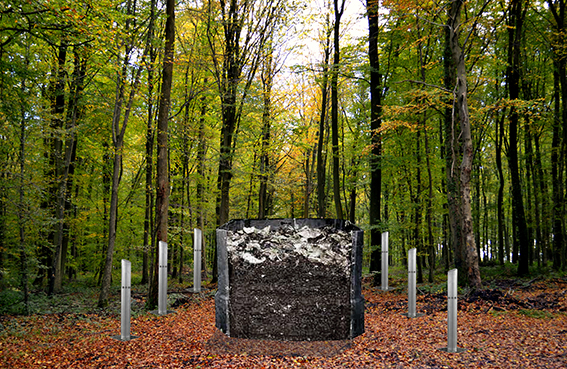 "The sound of the earth"

The project uses the natural process known as bioturbation whereby nature enriches the soil with leaves and other organic waste that are accumulated on its surface, especially during the Autumn. The bioturbation process can take many forms: waste accumulated in the earth's surface is transformed into fertilizer and soil by living organisms such as bacteria, fungi and, above all, earthworms.

This process constitutew a cycle in which the different layers of living organisms - those on the surface and those below - could be mixed, transformed, and mutually enrich each other. In a city like Berlin, this process is actually controlled by people through the recycling of organic materials that combine natural processes with human interventions in the making of compost.

'The sound of the earth' reproduces the sounds the earth makes during this process. The compost is made in a double level container: the top level, for waste and at the bottom level, earth. By the action of bioturbation, the waste became fertilizer. We will place one set of electronic sensors in the middle of the compost waste and another one in the middle of the soil in order to capture the sounds produced by this cycle and made, particularly, by the action of earthworms.

These sounds are amplified and retransmitted to the outside by a system of loudspeakers. The installation allows us to listen the sound of the earth in its constant the activity.